Not to be confused with the American 1998 creature Godzilla or related American Godzilla characters.

Zilla (IDW) is a giant monster from IDW's comic book series Godzilla: Rulers of Earth (issue 1, issue 2, issue 8, issue 9, issue 13, issue 21 and issue 25), originally set for release on June 19, 2013[1] but was later released on June 26, and with the second issue earlier thought to be coming out in July but which was released on August 6. The creature was set for a two-issues long "battle" with the IDW Godzilla. The creature is the second incarnation of the Zilla-character, where the first was Zilla (2004) from Godzilla: Final Wars. The IDW Zilla is based upon and represents the Final Wars Zilla, and therefore it doesn't have any breath weapon but only sharp claws.[2] It also has a powerful jaw filled with sharp teeth and it has the ability to burrow itself rapidly underground. Other outstanding abilities are its fast speed and elegant swimming ability.

IDW Publishing bought the rights to Zilla in order to have it included in the currently ongoing comic Godzilla: Rulers of Earth (also called ROE). The IDW Zilla, with a slightly different appearance from other American Godzilla incarnations, appeared in the two first issues. This is the second time the American Godzilla appears in comic book form, where the first was in the Godzilla: The Series webcomic.

IDW Zilla appears in promotion for the comic. 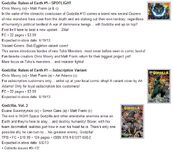 The expected release of this first issue was set to be June 19 but it was delayed until June 26. This issue includes "Chapter 1: In the Court of the King". The comic starts with a giant creature being discovered on a radar and which is presumed to be either Godzilla or a new species, and presumably this is the very first reference to Zilla in the comic. Later, during a Megazoology Conference in Honolulu, Hawaii, Zilla enters a beach and instantly causes panic and destruction. The human military defense and their high tech weapons are seemingly useless against the creature. Soldier Steven Woods recieves a warning that the creature identified as Godzilla was coming their way, but due to radio interference Woods recieved the wrong words and now falsely referred to the creature as "Zilla", and while they try to fight the creature and lead civilians into safety, suddenly the original Godzilla appears on the scene, ready to fight this new Godzilla. An official description by IDW of the first issue said:

The IDW Zilla makes its second appearance in this second issue of Rulers of Earth, and this issue even shows some reference to Final Wars. The comic picks up where the first issue ended, the IDW Godzilla and IDW Zilla stand face to face to each other and starts moving towards each other. While Godzilla tries to grab Zilla, the latter creature jumps to the side, but Godzilla hits Zilla in the head with his fists. With Zilla lying on the ground, Godzilla is about to put his giant foot down on the creature's head, but Zilla rapidly avoids the stomp attack and turns to rip up Godzilla's leg with its claws. Godzilla then grabs Zilla's tail with his jaws and throws him away. Zilla hits a large building, and Godzilla powers up his atomic breath and fires it at the creature. But it turns out Zilla had burrowed itself under the ground where the building once stood and thus it had escaped the atomic blast. An official description by IDW of the second issue said:

The IDW Zilla appears on a cover of the eight issue of ROE revealed on October 18, 2013 [7], but not in the comic itself. The cover features several monsters such as Godzilla, Rodan, Varan, Anguirus, Jet Jaguar, Titanosaurus, Kumonga, Zilla, and the Gargantuas Sanda and Gaira, and it is set for release in late January, 2014.[8]

The IDW Zilla reappears briefly in the thirteenth issue of ROE, where Chavez and Lucy spot him swimming in the waters around the coasts of Monster Islands. Chavez mentions that he believes the reason he's keeping his distance is because he's probably not welcome, while Lucy mentions that the other monsters will eventually come to accept him. 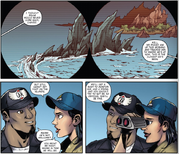 The IDW Zilla is one of the monsters who appear in the cover of the twenty-first issue of ROE, though not in the comic itself.

The IDW Zilla appears in the twenty-fifth issue of ROE, and also appears in the cover. He arrives in Los Angeles and kills a Trilopod to save Jet Jaguar. Shortly after, he participates in the battle against the Trilopods and manages to kill many of them. He then tries to attack Magita alongside Varan, but they are both defeated at the same time. Godzilla finally manages to destroy Magita, then he goes into the sea and Zilla follows him along with the other monsters.

IDW Zilla makes a brief appearance at the end of the fourth issue of Godzilla: Oblivion. He is seen emerging from an interdimensional portal along with some other Japanese Kaijus.

After Zilla was first introduced to the world of Godzilla in 2004 and re-introduced in 2013, fans who were previously disappointed on the American Godzilla character are increasingly changing their minds about the monster, and the amount of fans of the American Godzilla are constantly increasing. Although while some fans don't have any major problem with the fictional beast, other fans state that they can only like the creature if they don't refer to it as Godzilla.

When the news came that Zilla was going to be included in IDW's new comic, Godzilla: Rulers of Earth, fans reacted much in the same way as they did when Final Wars was released in 2004. Fans were both shocked and excited about the news and were generally pleased with how the comic project turned out. ShadowWing Tronix of bw media spotlight said in a review of the first issue:

Daniel Alvarez of Unleash The Fanboy said in a review of the first issue (written on June 25, 2013):

A predecessor to "Charging Zilla". A person told artist Matt Frank to make the drawing but wasn't pleased with it. 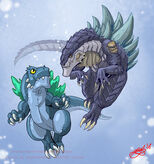 "G-Fan issue 100 lines" by artist Matt Frank.
Add a photo to this gallery

Retrieved from "https://the-american-godzilla.fandom.com/wiki/Zilla_(IDW)?oldid=17124"
Community content is available under CC-BY-SA unless otherwise noted.