Teen Godzillas, also known as TeenZillas, is a movie monster that was supposed to have appeared in the now cancelled Godzilla 2. The design by Patrick Tatopoulos is that of a hunched bent-over marine iguana. 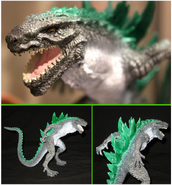 Retrieved from "https://the-american-godzilla.fandom.com/wiki/Teen_Godzilla?oldid=15168"
Community content is available under CC-BY-SA unless otherwise noted.