Godzilla is a pinball machine which was released into arcades in 1998 in correlation with the release of the 1998 film. About only 516 Godzilla pinball machines were made and a maximum number of six players can play the game.[2]

In order to play the game you have to insert 50 cents into the machine. The goal of the game is like all pinball machines where you have to get higher high score and like in all pinball machines you use a ball to reach that goal. Every time Godzilla takes a step and a "boom" is heard the shaker unit in the machine vibrates, and the roars of the new and old Godzillas can frequently be heard throughout the game while Godzilla also appears on the dot matrix where you can see him walking, crushing cars and sometimes breathing fire.[3]

If the player succeeds to place the ball in a certain spot then the player will recieve a bonus, like the Multiball Bonus for example which can be completed with 5 000 000 points. 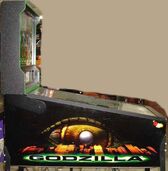 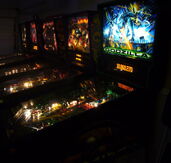 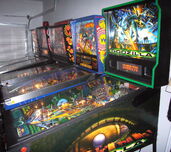 Retrieved from "https://the-american-godzilla.fandom.com/wiki/Godzilla_(pinball_game)?oldid=14444"
Community content is available under CC-BY-SA unless otherwise noted.