Godzilla (also called Godzilla '94 or Godzilla vs. The Gryphon) was supposed to have been the second American Godzilla film to be made, scheduled for release between 1994 and 1996, but was cancelled, but it gave rise to the later American film Godzilla.

A claim was that the final scene would have taken place on Ellis Island with Godzilla taking the Gryphon’s head and placing it on the Statue of Liberties torch.[1]

As TriStar wanted to make a new American Godzilla movie (since the latest American film was released in 1956 with Godzilla, King of the Monsters!) they hired Terry Rossio and Ted Elliott (the writers of the "Pirates of the Caribbean" franchise) to write a script for this proposed film. They later brought up Jan De Bont in the project, as he wanted to do a Godzilla film which was faithful to the Japanese films and at the same time offer some cutting edge special effects. De Bont let Stan Winston Studios create the design for the American monster. De Bont also wanted to make the film with a budget of 130 million, yet the studio wanted to make the film with much less, consequently leading to De Bont leaving the project, and ultimately ending the life of Godzilla '94.[2]

Only one piece of promotion was made for the 1994 film, which was merely a short teaser trailer announcement. 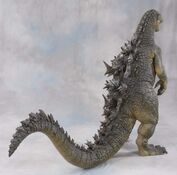 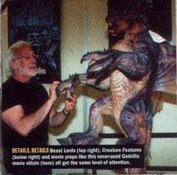 Retrieved from "https://the-american-godzilla.fandom.com/wiki/Godzilla_(1994_film)?oldid=15698"
Community content is available under CC-BY-SA unless otherwise noted.