The film is set in the present where mutant soldiers are in the ranks of the Earth Defense Organization. An alien invasion by the Xilians unleash a legion of giant monsters across the world, leaving behind only a few surviving humans. The survivors travel to the South Pole to free the Godzilla (2004) from his frozen prison while another group attempts to infiltrate the alien Mothership and take out the Xiliens.

As a 50th anniversary film, a number of actors from previous Godzilla films appeared as main characters or in cameo roles. Kaiju monsters as well made reappearances, as most were last seen more than thirty years earlier. Godzilla: Final Wars premiered on November 29, 2004 in Los Angeles, California and was released on December 4, 2004 in Japan. Before the world premiere, the Godzilla-character received a star on the Hollywood Walk of Fame.[1]

Endless warfare and environmental pollution has resulted in dangerous kaiju and the Earth Defense Force (EDF) is created to protect the planet. The organization is equipped with the best technology, weapons and soldiers, as well as mutants with special abilities. The Japanese Godzilla is the EDF's only unstoppable opponent. The EDF's best combat vehicle, the Gotengo, corners the Japanese Godzilla at the South Pole and buries him under the Antarctic ice, freezing him alive.

Several years later, the EDF discovers a mummified space monster. Mutant soldier Shinichi Ozaki and United Nations biologist Dr. Miyuki Otonashi are sent to research it. Shortly thereafter, the two encounter the Shobijin, fairies of the guardian monster Mothra, who reveal that the monster is Gigan, an alien cyborg sent to destroy Earth 12,000 years earlier. They also warn that a battle between good and evil will happen soon.

Monsters appear in major cities on Earth and the EDF attempts to drive them away. The monsters include Anguirus in Shanghai, Rodan in New York City, King Caesar in Okinawa, Kamacuras in Paris, Kumonga in Arizona, Zilla in Sydney and Ebirah near Tokyo. Despite defeating Ebirah, the EDF is unsuccessful in destroying the monsters. After destroying most of the cities, the monsters vanish and an enormous alien mothership appears over Tokyo. The aliens, known as Xilians, say that they are friendly and have eliminated the monsters. They also warn the Earth about an impending asteroid called Gorath that will impact soon. Because of their seemingly-friendly nature, the UN is disbanded and the Space Nations, an alliance to unite the universe, is organized.

Ozaki, Miyuki, the Gotengo's captain Douglas Gordon and several others distrust the aliens. Using research and undercover work, they discover that the Xilians are actually the ones who unleashed the monsters, and they replaced several members of the EDF with android duplicates. They plan on subjugating humanity to harvest their mitochondria for food. The Xilians are exposed on television. Opposed to the Xilian commander's decision to subtly take over Earth, the alien's subordinate, the Regulator named X, kills the commander and assumes control of Earth's mutants, except for Ozaki. The monsters are again released in Earth's major cities. Ozaki, Miyuki, Gordon, and others flee to their secret facility.

On Mt. Fuji, a hunter, Samon Taguchi, and his grandson, Kenta, discover Minilla, the Japanese Godzilla's son. They are successful in keeping a low profile and hiding from the Xilians' assault.

Gordon proposes freeing the Japanese Godzilla to allow the dinosaur to defeat the other monsters. Using the Gotengo, the EDF goes to Antarctica while being chased by Gigan. After the Japanese Godzilla is released from his hibernation, he kills Gigan, and follows the Gotengo. The Gotengo returns for Tokyo, hoping Godzilla will unwittingly defeat the Xilians. The Xilians send the controlled monsters after Godzilla, but he defeats them in short battles. The Gotengo and Godzilla arrive at Tokyo, whereupon the Gotengo enters the mothership.

During the battle, Ozaki's friend Kazama destroys the Mothership's shield generator at the cost of his own life. Meanwhile, the asteroid Gorath strikes the Japanese Godzilla. Monster X materializes and starts to battle the Japanese Godzilla. Gigan, who has now been upgraded, aids Monster X, but Mothra arrives to engage him into battle. Inside the Xilian mothership, the humans confront the Xilian Regulator. Ozaki is revealed to be a Keizer, an all-powerful being capable of controlling Earth. Deciding to stay with the humans, Ozaki fights the Xilian Regulator, who is also a Keizer. After an extended battle, the humans are victorious and flee the Mothership's destruction.

Several computer animated monsters were created for use in the film. They consist of Manda, Mothra, Kamacuras, and Zilla. Stock footage from previous films were used for other monsters, such as Varan, Gaira, Baragon, Gezora, Titanosaurus, Mechagodzilla, and Megaguirus. The costumes for Rodan, Anguirus and King Caesar were used for fan events after the plans to destroy them were removed.

The music in Godzilla: Final Wars was composed by Keith Emerson, Daisuke Yano and Nobuhiko Morino, while the band Sum 41 contributed the song "We're All To Blame" to the soundtrack (and received high billing in the film's opening credits sequence). Some critics expressed concern with the music of Final Wars, arguing that Emerson's score would be better suited for a campy made-for-television movie or video games, while others pointed out that it made a refreshing change from the music of previous Godzilla films.

Akira Ifukube's themes were mostly absent from the movie, though Godzilla's original theme can be heard at the beginning of the film. However, Keith Emerson did cover the Godzilla theme which is available on the film's official soundtrack. The cover is entitled "Godzilla (Main Theme)".

The bands Sum 41 and Zebrahead contributed the tracks "We're All To Blame" and "Godzilla vs. Tokyo" respectively, to the film,[2] however neither song was on the film's soundtrack.[3]

On the set of Final Wars, shooting the first scene with Zilla.
Add a photo to this gallery

Godzilla: Final Wars has received mixed reviews from film critics and fans alike. As of May 2011, review aggregate Rotten Tomatoes reports that 44% of critics gave positive reviews for the film based on nine reviews.[4]

Steve Biodrowski of Cinefantastique called the film "utterly fantastic" and "a rush of explosive excitement."[5] Jim Agnew of Film Threat gave the film four and a half stars out of five, saying "the good news for kaiju fans is that Godzilla: Final Wars is a kick-ass giant monster flick."[6] Drew McWeeny of Ain't It Cool News remarked, "Godzilla: Final Wars earns a special place in my heart. It's fun. Pure lunatic fun, every frame."[7] Sean Axmaker of Static Multimedia said, "Directed by a true fan of the old school, it's lusciously, knowingly, lovingly cheesy."[8] Craig Blamer of the Chico News & Review called the film "a giddy and fast-paced celebration of the big guy."[9]

Among kaiju-related websites, J.L. Carrozza of Toho Kingdom "absolutely love[d]" Final Wars, saying "[it's] no masterpiece, but it is such insane fun that quite frankly it's hard not to adore it."[13] Mike Bogue of American Kaiju said "the film is flawed, but nonetheless entertaining," saying there are "too many [Matrix-style] battles" but that the film "makes excellent use of its monsters" and "Kitamura keeps things moving at a brisk pace."[14] Japan Hero criticized the "[lack of] character development" but concluded that Final Wars is "a very entertaining movie," saying that "Kitamura did a wonderful job making it an interesting and great looking film worthy of being the final [Godzilla] movie."[15]

Stomp Tokyo said "the monster scenes are generally well done" but criticized the film's "incoherence," saying: "It's a shame that Kitamaura couldn't choose a tone for the film, instead shifting the movie's mood wildly from scene to scene."[16] Lenny Taguchi of Monster Zero criticized Keith Emerson's soundtrack but gave Final Wars an overall favorable review, calling it a "fun and good" movie that "tries many things, and generally succeeds at almost all of them."[17]

At roughly $19,500,000, Godzilla: Final Wars was the most expensive Toho-produced Godzilla film of all time.

Any hopes Toho had of Godzilla: Final Wars ending the series with a box office bang were crushed when the film opened in Japan on December 4, 2004. In its opening weekend, it came in third at the box office with $1,874,559. At the holiday season box office, it was clobbered by Howl's Moving Castle and The Incredibles, both which also pursued the family market. It eventually grossed roughly $12,000,000 at the Japanese box office, with 1,000,000 admissions. Not only was it the least-attended film in the Millennium series, it was also the least attended film in 29 years since Terror of Mechagodzilla.[18] 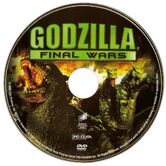 Retrieved from "https://the-american-godzilla.fandom.com/wiki/Godzilla:_Final_Wars?oldid=17416"
Community content is available under CC-BY-SA unless otherwise noted.