This article deals with the Godzilla-design created in 1998 and used in later official installments in the Godzilla-franchise. For the Japanese counterpart, see: Japanese Godzilla

American Godzilla (or AmeriGoji) is a name that specifically refers to the Godzilla-creature/design that was created by Patrick Tatopoulos, director Roland Emmerich and producer Dean Devlin in 1998 for the American blockbuster film Godzilla. The name is also used for later incarnations and creatures based upon this monster, such as Zilla from the 2004 film Godzilla: Final Wars and its rebirth as the IDW Zilla in the 2013 comic Godzilla: Rulers of Earth. Previous attempts at making American Godzillas in the 1983/1984 film Godzilla: King of the Monsters 3-D and the 1994/1996 film Godzilla failed for different reasons. A new American Godzilla has yet been set to rise in the 2014 film Godzilla, but which is more commonly referred to as the Legendary Godzilla.

The American Godzilla is another interpretation of the Godzilla character that was originally created by the Japanese company Toho Co., Ltd. and the creature was therefore named as "Godzilla" and is named Godzilla in its own fictional universe by the American company TriStar Pictures, but in Toho's universe there is their own version named "Zilla". The name is a Japanese alternative name of the American Godzilla and is shared with the creature/character Zilla created in 2004.

The American Godzilla has a very distinct roar and special sounds, the roar itself is a new and modern or imrpoved version of the Japanese Godzilla's roar.

Despite the origin of the American Godzilla being herbivorous marine iguanas eating seaweed, modern marine American Godzilla-iguanas are carnivorous and feed on fish. This is probably due to mutations and changes in habitat caused by French nuclear tests in French Polynesia, the origin and birth place of the creature. These drastic changes in the marine iguana probably had the evolution of the animal to force it to choose another more plausible choice of food, especially when it gets larger and finally becomes the largest animal on Earth and needs more to eat in order to survive. The choice of eating fish probably also contributed to the marbulous intelligence of the creature.

The creature Zilla seems to feed on meat, and especially on human flesh. However, the Controller Xilian says (in the Japanese version) "I knew that tuna-eating lizard was useless.", which probably means that Zilla also eat fish such as tuna.

American Godzillas are known to build nests, either for themselves or for their young. The first Godzilla built a nest on land in Madison Square Garden where it later laid its eggs, while the son of the first creature, also called Godzilla, made a nest in a cave on the sea-floor of the Hudson River.

American Godzillas are asexual animals, meaning no matter the gender the creature can still reproduce without mating with another one of its species. The animals are also egglayers which can lay up to hundreds of eggs at a time. Although there have been one case where an individual of the species was sterile, and thereby was unable to reproduce on its own. The sterile creature however once found a female of a different lizard species and genus (the Komodo Dragon Komodithrax) and served as an adoptive father to the female's one single egg. This caused the sterile Godzilla to become more protective and thereby more aggressive against humans and other animals.

Like other reptiles, the American Godzilla has a cloaca, which is a single opening for urination, defacation and laying eggs.
Add a photo to this gallery

American Godzillas are great diggers which are able to rapidly dig through almost any ground, including for example solid rock, soil, concrete and city streets. 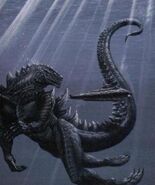 The American Godzilla known as Godzilla swims in the Hudson River. 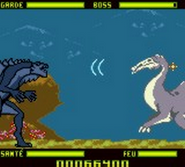 The description of the American Godzilla is something that makes this animal species very iconic. 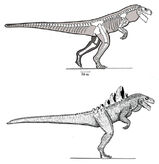 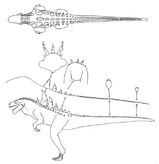 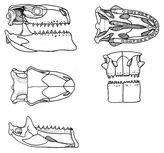 The atomic/nuclear breath of the American Godzilla is a controversial subject and the breath is different in every individual.

The eye of the American Godzilla species are a very distinctive characteristic. Their orange/yellow/red color and white pupil gives the eyes a very unique eye color and look.

The large head is distinctive because of its square/rectangle-like shape and its protruding lower jaw. The head is then attached to the large neck which on the upper part (leading down to the back) is covered in smaller dermal spikes.

The skin color scheme of the American Godzilla usually consists of a greyish-black-blue color but can also have traces of brown, green, red, orange, yellow, purple, white, silver, bronze and gold.

The American Godzilla species originated in the French Polynesia during French nuclear testings.

The species was presumed extinct after the 1998 incident where the first American Godzilla and its babies were killed by the US military in New York City. But one egg survived, leading to the survival of the species (there are two alternate sequels, Godzilla 2 and Godzilla: The Series, which tells two slightly different tales). Yet another American Godzilla (Zilla) turned out to live in Sydney, Australia, but this one has an unknown origin and was killed by an individual of the Japanese Godzilla species. Although this creature might exist in an alternate universe.

Retrieved from "https://the-american-godzilla.fandom.com/wiki/American_Godzilla?oldid=17464"
Community content is available under CC-BY-SA unless otherwise noted.